Their history, and the fascinating technique to make them
Skip to blog sidebar navigations
Congolese Kuba dancers in their full regalia | Credits-Forbes Africa

Kuba cloths originated in the 17th century in the Kuba kingdom of central Africa, in modern-day Democratic Republic of the Congo, formerly Zaire. They are unique for their elaboration and complexity of design and surface decoration. Most cloths are a variation on rectangular or square pieces of woven palm leaf fiber enhanced by geometric designs executed in linear embroidery and other stitches, which are cut to form pile surfaces resembling velvet. Women are responsible for transforming raffia cloth into various forms of textiles, including ceremonial skirts, ‘velvet’ tribute cloths, headdresses and basketry.

The word “Kuba” means “lighting” referring to the blades that were once used by Kuba warriors. These tactile cloths from the Congo are each handcrafted in the traditional way, the men weaving on a small hand loom and the women taking great pride in their embroidering of these squares. Kuba ceremonial squares can take three months to complete. A technique known as "cut pile" in which the ends of the raffia embroidery threads are cut very short & close to the surface, produces a soft texture similar to velvet. They are used as body wrappers, mats, blankets or used as currency.”

After migrating south in the 16th Century and between the 17th and 20th Centuries, the Kuba kingdom, (also known as the Kingdom of the Bakuba or Bushongo), was one of the most extended and powerful societies in Africa, trading in ivory and rubber in the southeast area of what is now the Democratic Republic of the Congo.

The Kuba kingdom was founded by Shyaam a-Mbul in 1625 and historians often note its highly developed political system, which included elections and trial by jury (both of which were uncommon at the time). Comprised of more than 17 ethnicities, the Kuba kingdom drew much of its strength from creating this alliance between distinct groups, and as the larger nation-state gained power, its arts industry flourished. The kingdom gained wealth by controlling the ivory and rubber trades, and commissioning artists for sculpture, basketry, and textiles became an important signal of the region’s prosperity.

As far back as early 17th century, central governments in the region collected textiles as a form of tribute-tax to expand the royal treasury. The Wissmann expedition into the Kasai River region in 1884 first reported the presence of these outstanding cloths but it is noted that the Bakuba resisted exchanging their products in trade for imported cloth for many years.

The kingdom reached its apex during the mid 19th Century. 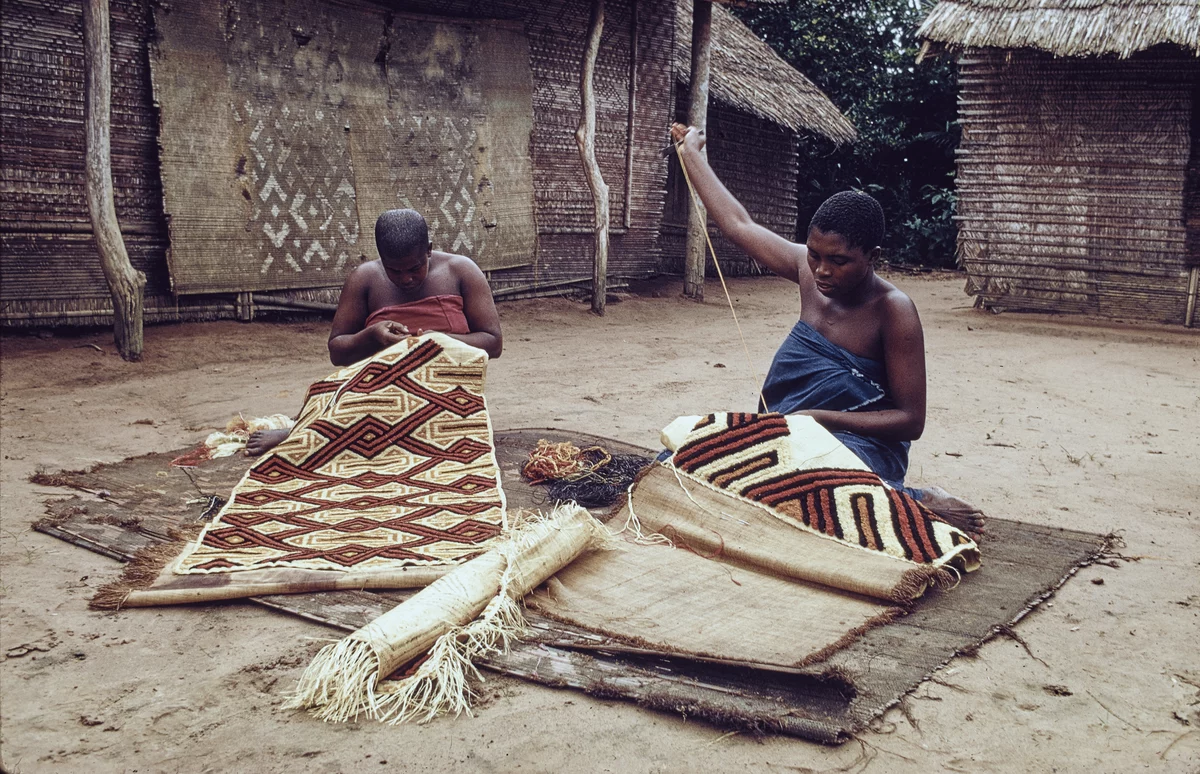 One primary cultural export from this bustling society is the Kuba cloth, which is borne of a time-intensive process involving multiple people.

In Kuba culture, men are responsible for raffia palm cultivation and the weaving of raffia cloth. Several types of raffia cloth are produced for different purposes, the most common form of which is a plain woven cloth that is used as the foundation for decorated textile production. Men produce the cloth on inclined, single-heddle looms and then use it to make their clothing and to supply foundation cloth to female members of their clan section. The cloth is coarse when it is first cut from the loom, so it is then pounded in a mortar, which softens it and renders it ready for the application of surface decoration, for which women are responsible.

First, the raffia fibers are stripped and kneaded for an initial softening. The strands are then colored using vegetable dyes, creating the shades of ivory, brown, clay red, and indigo blue that are associated with many arts of the Kuba kingdom. A flatweave textile is then produced on an inclined heddle loom, usually by male weavers. At this point, another round of dyeing or kneading may take place, before handing the piece off for "finishing" work typically carried out by Kuba women. These decorative techniques can include embroidery, appliqués, or patchwork, and result in a cut pile cloth whose texture resembles velvet.

A single placemat-sized Kuba cloth can take several days to complete. Often, many articles are joined together for larger prestige pieces, which were historically used to denote the wealth and supremacy of Kuba rulers. 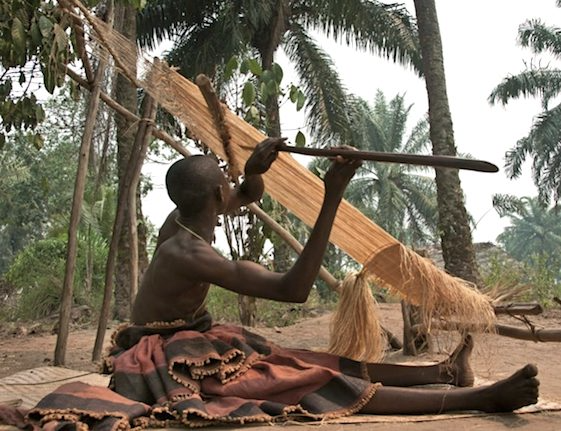 Although part of a tradition that stretches back 400 years, Kuba cloths have a strikingly modern look. They use improvised systems of signs, lines, colors, and textures, often in the form of complex geometric rectilinear patterns. Their appliqués are reminiscent of works by 19th- and 20th-century masters like Matisse, Picasso, Klee, Penck, and Chellida, who were all inspired by Kuba design.

One surviving photograph shows Matisse in his bedroom, surrounded by Kuba textiles—an indication of how deeply he was influenced by Kuba design. It is said that he would sit and stare at them "waiting for something to come to me out of there instinctive geometry". His 1947 paper cut-out Les Velours reportedly was influenced by kuba appliqué. 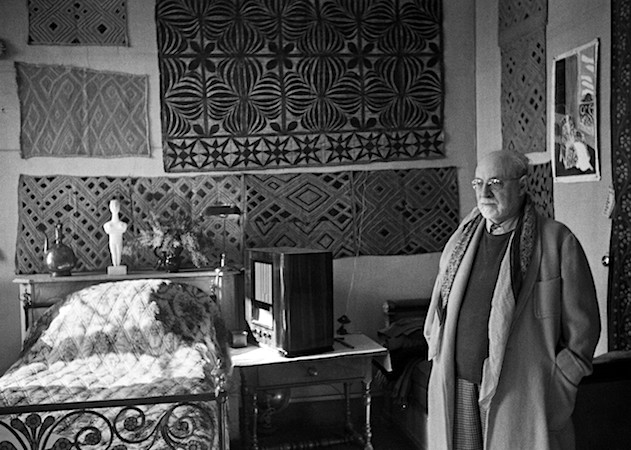 There are 2 major types of Kuba cloth in terms of production, all using raffia palm: Shoowa and Appliqué

Firstly, the cut-pile tapestry cloths called shoowa and secondly the appliquéd cloths which are strip woven, the appliquéd designs are stitched on and then the cloth is sewn together to make the final item (long wraparound skirt). The men of the tribes are responsible for cultivating, cutting, gathering and dyeing the fabric using indigo, mud and especially substances from the camwood tree which are referred to as twool and are red in color.

The raffia fibre is rubbed by hand to soften it for weaving and then woven into cloth on inclined, single-heddle looms.

Appliqué - is the most popular weaving technique among the Kuba. To create an appliqué, Kuba artists use a stencil to cut decorative designs out of a brightly colored cloth, and then sew or apply the designs onto a cloth of a different color. The designs are then placed on top of yet another cloth. Through this process, the artist has the freedom to create an almost unlimited variety of patterns and combinations.

The most familiar appliqués are dark brown or black on an ecru background, a pattern which is sometimes seen in reverse. Other popular appliqués are red or yellow, or are placed on a red or yellow background. Appliqués can also be natural-on-natural (or occasionally red-on-red). The black-on-neutral embroidery which resembles an elaborate maze is the work of the Ngeende or Ngoongo. 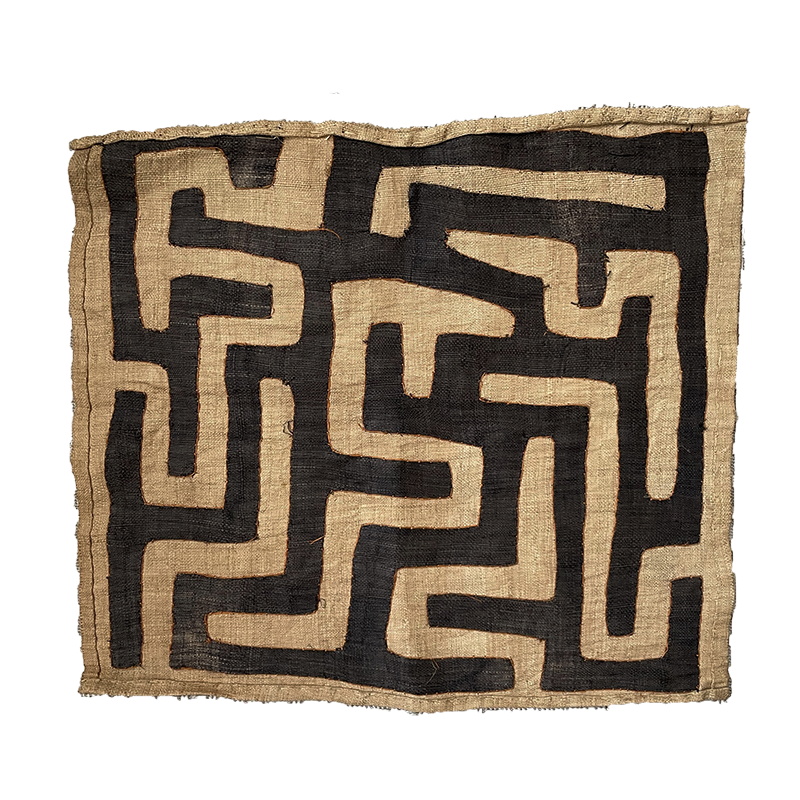 The Shoowa people introduced cut-pile embroidery to the Kuba kingdom following their incorporation into the centralized state in the mid-17th century. This technique is highly specialized and time consuming. Designs are stitched onto the cloth and then raffia fibre is drawn through with needle and snipped with a knife to make a dense pile allowing a plush, velvet-like effect to be created.

Shoowa designs are completely abstract, based on a complex series of symmetries.

The designs themselves likely didn't carry a literal symbolic meaning but were instead products of the creative invention of the artists, mostly women, who created them and whose names have been lost to time, travel and the DRC's troubled colonial and modern history. But they tell a story about how the Kuba's leaders asserted themselves in a changing world. 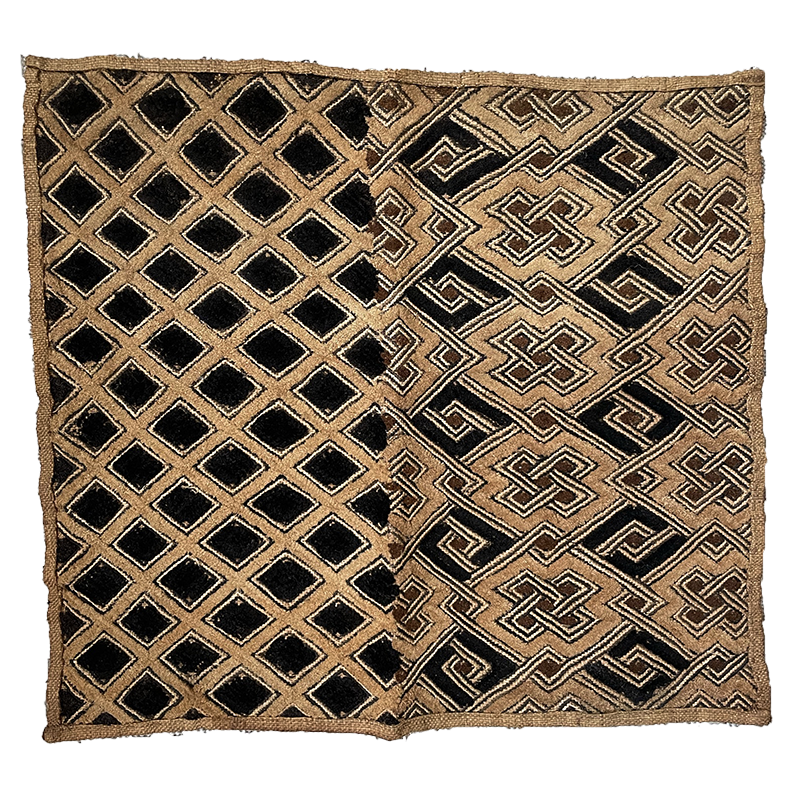