The influences of African art on various artists and movements throughout history recount fascinating stories of cultural exchange, theft, homage and colonialism. In this series of articles, Inspired by Africa, we assess the ways that some of the most famous artists in the world borrowed from African art to create some of their masterpieces. First and foremost, we visit the works of perhaps the most acclaimed artist of the modern era: Pablo Picasso.

It was said that a visit in 1907 to the Trocadero Ethnography Museum (now Musée de l’Homme) first sparked Picasso’s interest in African art. Weaving through the corridors of antique pieces that had been brought back during French colonial occupation of Africa, he described his ambivalent reaction to the artworks: ‘When I went to the Trocadéro, it was disgusting. Like the Flea Market. The odor. I was alone. I wanted to leave. But I didn’t. I stayed. I stayed. I understood that it was very important. Something was happening to me…’[1]

This quote, written in a letter to André Malraux, reveals at once Picasso’s revulsion and fascination with African art. He described the works as ‘primitive’ and ‘fetishes’, and yet his pull towards the spiritual and emotional aspects of the pieces was undeniable. They were the foundations of what was to become one of his most well known masterpieces, Les Demoiselles d’Avignon. 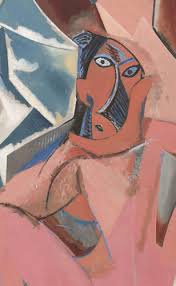 Another account (and Picasso himself) states that the artist’s first inspirations for the Desmoiselles was when an acquaintance gifted him with some Iberian masks that had been stolen from the Louvre Museum.[2] Whether this is true or not, what is evident is that by the time of creation of Les Demoiselles, the artist had actively been collecting African masks. Indeed, the faces of the women in the masterpiece echo the proportions and features of the masks that Picasso had in possession, such as reliquary figures from Gabon and masks from the Ivory Coast.[3]

Although Les Desmoiselles d’Avignon is Picasso’s most prominent African-inspired painting, principles and features that he picked up from African art were infused into his works before and after the creation of this masterpiece. His portrait of Gertrude Stein (1905-1906), for example, shows visible mask-like features with her distinct, elongated nose, hardened brow and almond-shaped eyes. A self-portrait painted around a similar time (1906) shows similar features, with a marked eyebrow and hollowed eye sockets. And of course, although Picasso’s African-inspired period was short-lived (1907-1909), his exposure to non-Westernart launched him into an exploration (and deconstruction) of perspective, proportion and geometry of forms, which ultimately led to Cubism.

Today, we are able to recognise the inherent prejudice and disregard artists such as Picasso had towards African art in the early 1900s, and the way in which they appropriated the objects that they encountered. As witnessed in Picasso’s letter to Malraux, African art was often viewed as the creation of uncivilised cultures, and Picasso denied African influence in his artworks. However, he expressed the power that traditional African art had upon him, and he tapped into the freedom and spiritualism that he sensed from these works. It is from this deeper connection that Pablo Picasso was therefore able to create the artworks that shifted the direction of modern art, and produced some of the most celebrated masterpieces today.