Art historians and artists of African descent have long highlighted the platitudes of the term ‘African art’. Typically, in the canon of art history, African art has been reduced to masks, votive figures, weapons or tapestries. However, curators, African art historians, and creators have been fighting against this one-dimensional view of African cultural output, in the aims of presenting a diverse and rich African arts scene, as variegated and unique as there are as many countries on the continent.

Here at Pavillon54, one of our main missions is also to educate and promote the incredible assortment of artistic styles and techniques that can be found in modern and contemporary African art. We’ve highlighted seven popular art styles that are worldwide and universal, already well-integrated in the art historical canon, but here we are presenting it with a unique African twist. How have modern and contemporary African artists contributed to these popular artistic movements, and who are the key players? Read on to discover more!

Did you know that much of modern and contemporary African art has strong ties with environmentalism? This is because for many artists, using materials at hand is a key part of their practice. Many of these artists don’t create such pieces with the intention of becoming ‘Environmental’ artists, but rather, using the materials around them is a part of their existing culture and makes a more poignant statement about the effects of capitalism, as well as Western colonialism and consumerism on the African continent. The benefit of this approach is that using waste materials or recycled plastics to create paint means that the artworks are inherently more environmentally friendly. Take, for example, one of the most famous of such artists, El Anatsui. Anatsui’s renowned tapestry-like wall sculptures are composed entirely of discarded bottle caps and scrap waste material. To him, these objects speak of the connection of European and African history, as well as the topics of global consumerism and even colonialism.

Among our own P54 community are two exceptional artists who could also be aligned with the environmental art movement: Mbongeni Buthelezi and Saint-Etienne Yeanzi. Both use a unique yet distinct technique of melting recycled plastics to create paint. The result? The production of a similar, eco-friendly type of paint, but with totally different results in terms of artistic style and flair. 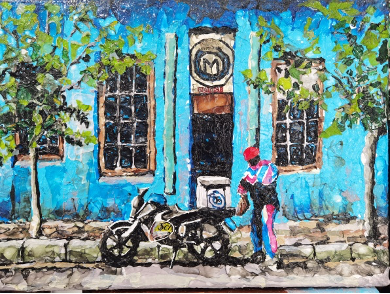 For the most part throughout African art history, figurative styles have been more popular than abstract movements. Even a glance through our e-gallery quickly reveals that even if there are some elements of impressionism or abstraction in a work, almost all the artworks are figurative and resemble real-life forms in some capacity. Indeed, the subject matter of a stylised human figure has been the focal point of African art for centuries, including in traditional artworks such as the masks and votive figures most of us are familiar with. This tendency has extended into the modern and contemporary eras. Some of our favourite contemporary African figurative artists? Amoako Boafu, who achieved five times his high estimate at the Sotheby’s Contemporary African Art auction in October this year, Kehinde Wiley, who famously painted Barack Obama’s portrait, and our very own Mafalda Vasconcelos, who has begun to receive incredible praise and coverage of her practice in recent years. 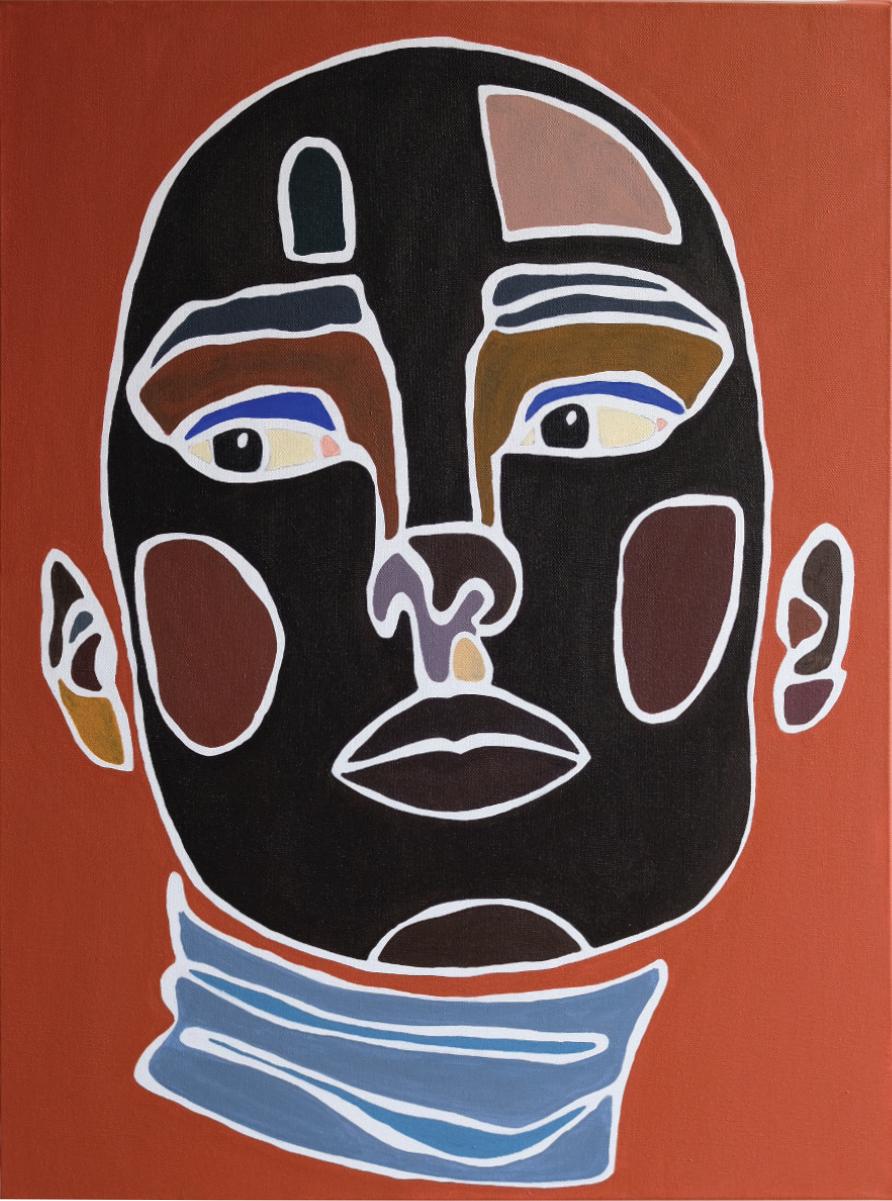 Mafalda Vasconcelos’s Looking at you, 2020 Retrieved

When one thinks of street art in conjunction with African art, one’s instinct immediately turns to Jean-Michel Basquiat, who famously started his artistic career by tagging the streets of New York under his pseudonym SAMO. Due to street art and graffiti’s connection with hip-hop and black culture in America, the art movement has its roots in the African diaspora. It was Basquiat who took elements of street art and elevated it to the high-art form that we celebrate today. But who are some other contemporary African street artists that you should know? South Africa, in particular, is one of the centres of street art on the continent. The Bushman, who lives and works in Cape Town, integrates bright colours and hopeful messages into his works to promote a sense of community and well-being for the city’s residents. Ricky Lee Gordon, a Johannesburg-born artist who now resides in Cape Town, is another stellar artist whose murals speak on social issues, sometimes referring to segregation and apartheid, and the ongoing need of unity and compassion. For the most part, African street artists continue the original purpose of street art as a means to spread messages of either discontent and rebellion against governments and certain social issues, or, in recent years, to spread a hopeful message. 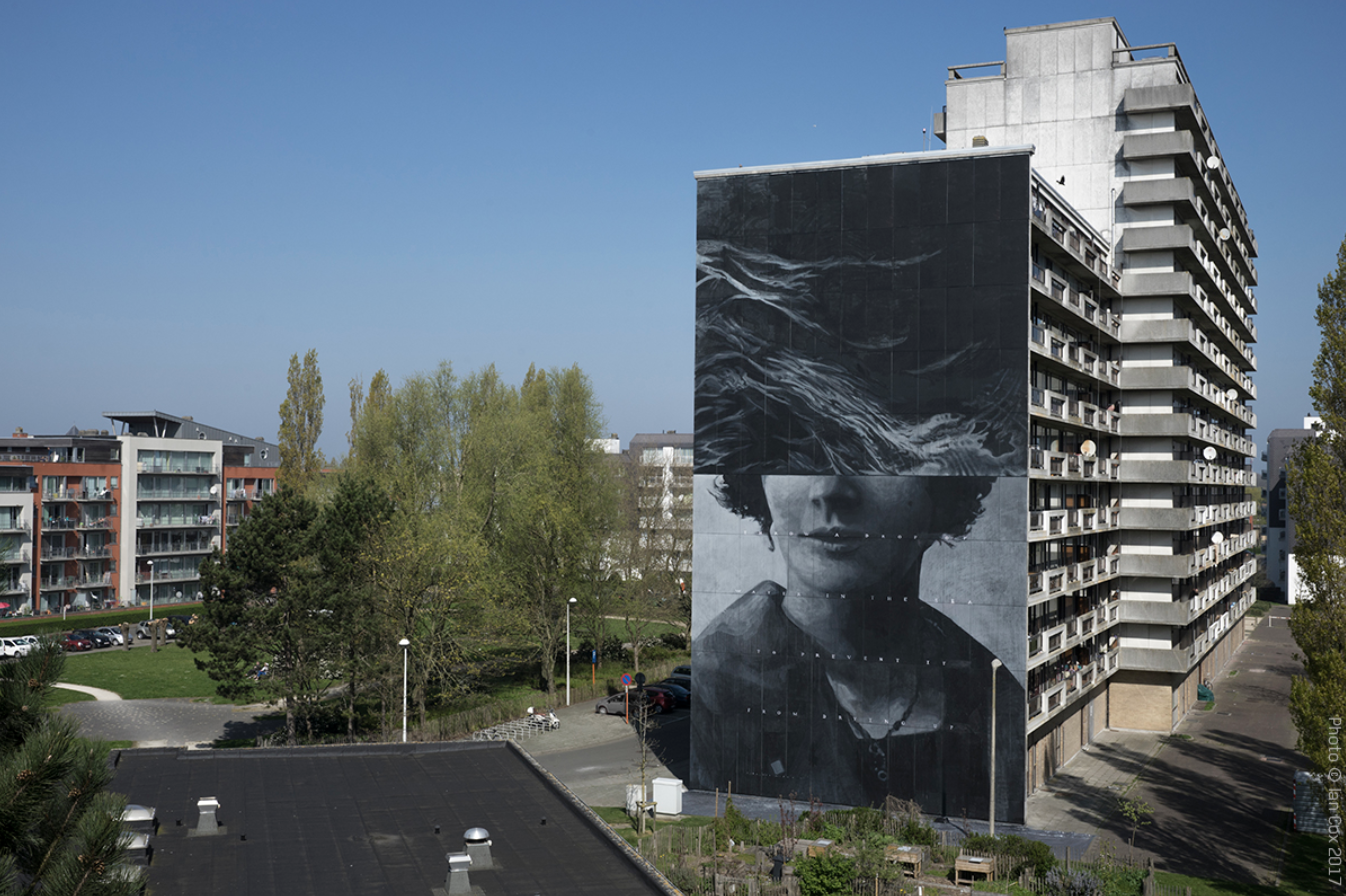 Pop Art is primarily attributed to Andy Warhol, who famously ran his Factory in New York, inviting celebrities and other star-studded artists to his studio to party and act as models or muses for his artistic works. Much of the Pop Art movement centres around glorifying the everyday and mundane (hence Warhol’s notorious focus on Campbell’s soup cans as a primary subject matter for his works), or creating multiples of artworks (mostly through prints) as a tongue-in-cheek way of rebuking the idea of an original, irreplicable, high-art form.

African artists have taken great inspiration from this modern master and have adopted the codes of Pop Art to further causes closer to the African continent. Nigerian Pop Artist William Chechet, for example, uses digital art to highlight key figures in African history, with aims to elevate these people to the same level of importance as those in the West. Chechet incorporates the comic-like motifs of Roy Lichstenstein to situate his art practice firmly within the realm of contemporary Pop Art, and yet inserts the portraits of African people to make his artworks speak to a new audience, or attract the attention of existing Pop Art aficionados to view the movement in a novel way. 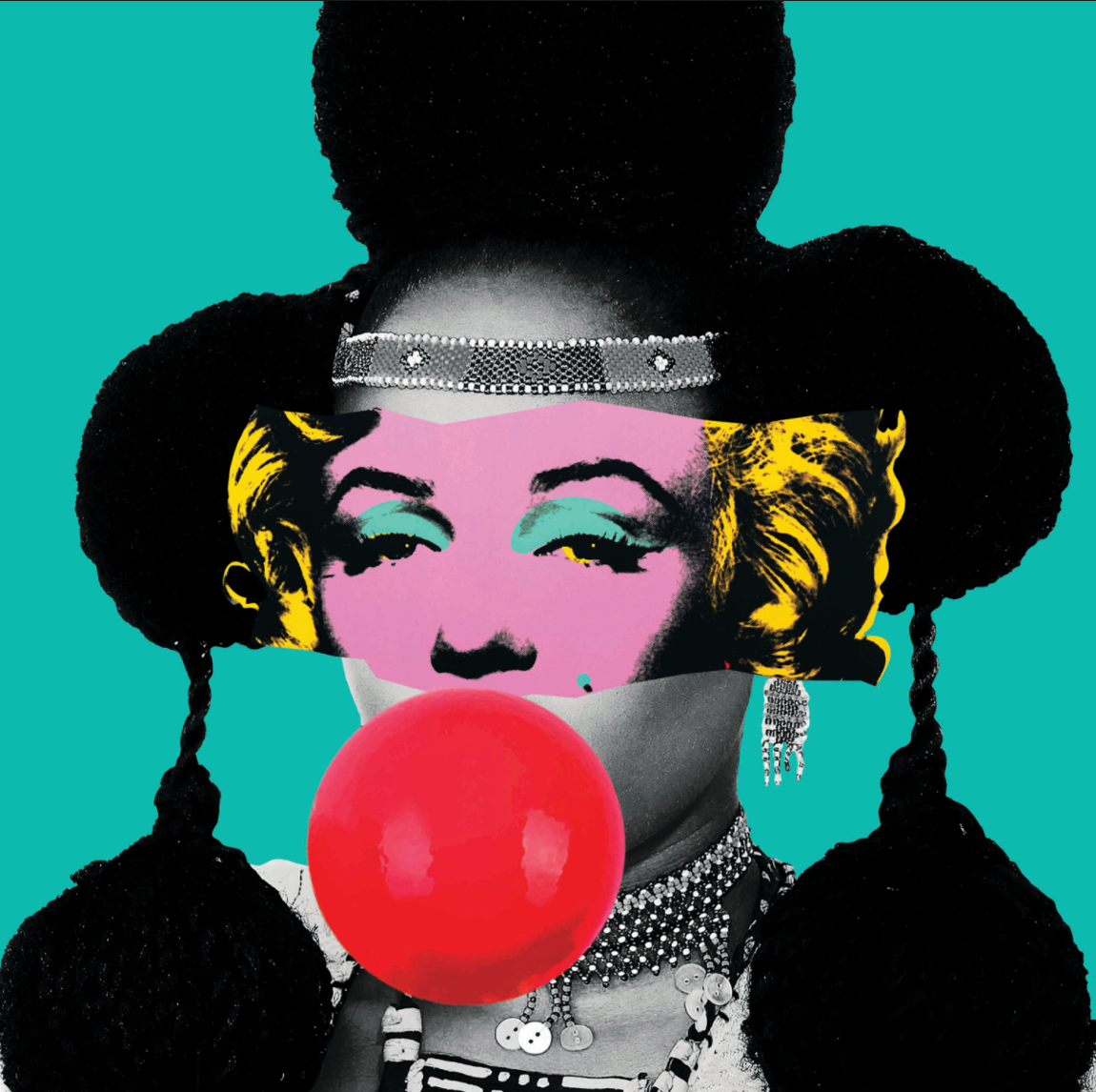 Williams Chechet’s Her Worth II, 2019

Performance art is an artistic movement that began in the 1960s and is often an act or a performance executed by the artist or participants, sometimes also including the audience. A final ‘artwork’—in the sense of a final, physical object such as a painting or sculpture—rarely exists, and performance art is mostly documented through photography or film. Today, Marina Abramović is considered one of the most famous contemporary performance artists, however Performance Art has also been taken up by African and African-American artists to make a bold point about various plights black people face in today’s society. Of these artists, Tracey Rose and William Pope. L are two of the most significant.

Tracey Rose is a South-African artist who is an outspoken feminist, and whose artworks reflect her passion for the cause by highlighting topics such as body image, race, gender, and sexuality. She creates daring performances, video installations, and photographs that usually use her own figure as the subject matter and are often designed to shock or wake up their viewers.

William Pope. L’s practice is similar in the fact that there is an element of shock or discomfort upon viewing his works. The African-American artist is most famous for his performance works where he crawls across the streets of New York—often dressed up in a Superman costume or a business suit—a gruelling and grimly humorous act in which one can find ‘racial satire, a stereotype confirmed, or the embodiment of pure human idiocy.’ 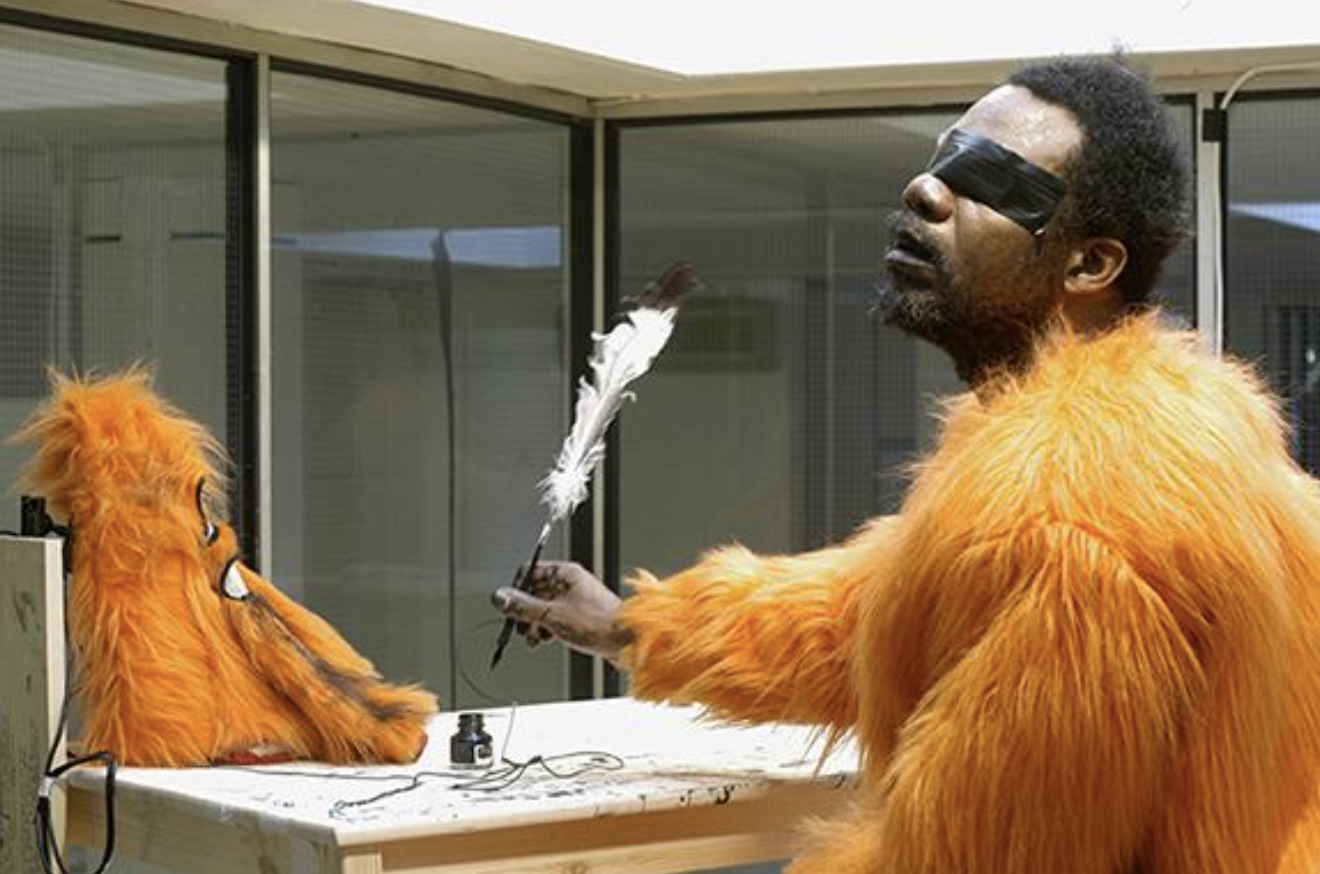 Surrealism as an artistic movement arose in Europe around the 1920s, and spanned across not only fine art, but also poetry, literature, and psychology. The movement aimed to tap into the unconscious mind to release creative potential, resulting in eerie dream-like landscapes that puzzle and intrigue viewers world-wide. Salvador Dalí, René Magritte and Frida Kahlo are just a handful of the most famous Surrealist artists of the early 20th centry.

African artists have also picked up on this art historical movement, incorporating the ideas of the subconscious and of dreams into their artworks, thereby creating symbolic and mystifying pieces. This particular strand of Surrealism is known as ‘Afro-Surrealism’ and is primarily connected with literature, with figures such as Henry Dumas and Toni Morrison at its helm. In terms of visual art, Kara Walker and Krista Franklin can be counted among the Afro-surrealists, with Franklin focussing primarily on collage and works on paper, and Walker working across a range of media to explore themes of race, colonialism, gender, sexuality and violence. 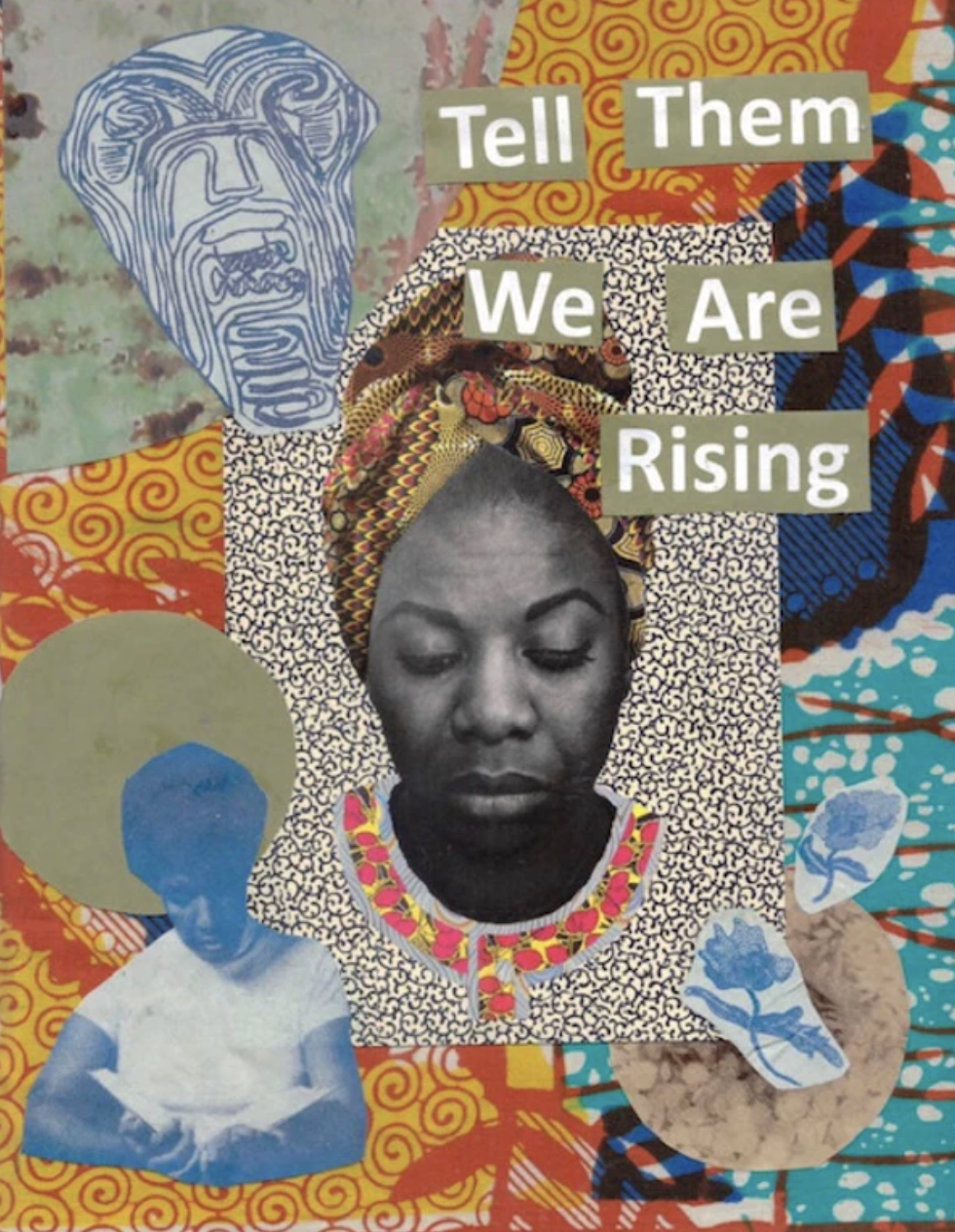 Doriana Diaz’s Tell Them We Are Rising 2019

Abstract art is a wide-spread art movement that spans multiple genres—geometric art, Abstract Expressionism, Cubism, Suprematism and others all fall under this umbrella. Although African art has typically tended towards figurative art, there are plenty of artists from the continent and the diaspora who also specialise in Abstract works. El Anatsui, though already mentioned for his focus on Environmental Art, can also fall under the Abstract category, for example. Other artists in the Abstract tradition include Frank Bowling, Mary Lovelace O’Neal and Shinique Smith, whose practices demonstrate the diversity of this field. Frank Bowling’s works focus on colour relations, but also often refer to maps—particularly using the map of Africa as an origin point for his pieces. Mary Lovelace O’Neal also includes bold and vibrant colours, and are often expressive in movement and brushstroke, though the artist is also closely related to Minimalism. Shinique Smith, on the other hand, focusses primarily online and movement, and often incorporate found objects such as textiles and collage materials. 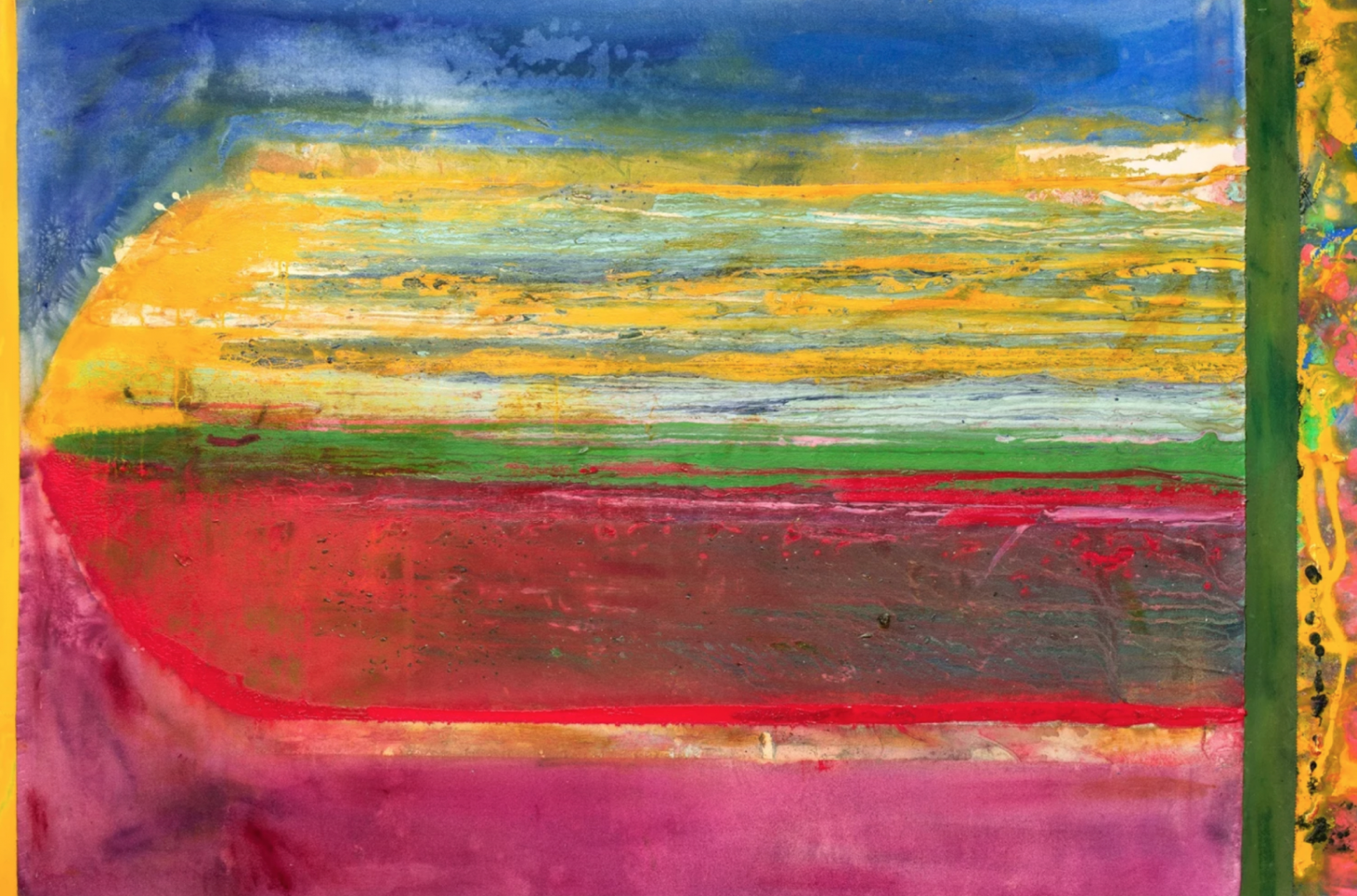 Though African art has evolved and disseminated to all types of artistic styles and movements, the above seven categories provide just a taste of the diversity and range of African cultural output. Which African artistic styles are your favourite, or which other important movements do you think we’ve missed? Let us know!