Nigerian-American artist Victor Ekpuk has come to acclaim through his unique visual language, which abstracts the ancient Nigerian script Nsibidi and indigenous Uli art forms. By taking these codes and philosophies as the base for his artistic practice, Ekpuk creates his own symbolism that aims to decrypt the truths of the human condition, placing particular focus on the contemporary African diaspora. Through his paintings, drawings and sculptures, Ekpuk’s language is instantly recognisable, with strong use of intricate linework and bold colour bearing the hallmarks of this signature. Through deep research into the philosophy of Nsibidi script, which the artist studied during his Bachelor of Fine Art at Obafemi Awolowo University in Nigeria, Victor Ekpuk’s work borders drawing and writing, furthering the concept of art being an inherently communicative and story-telling medium. 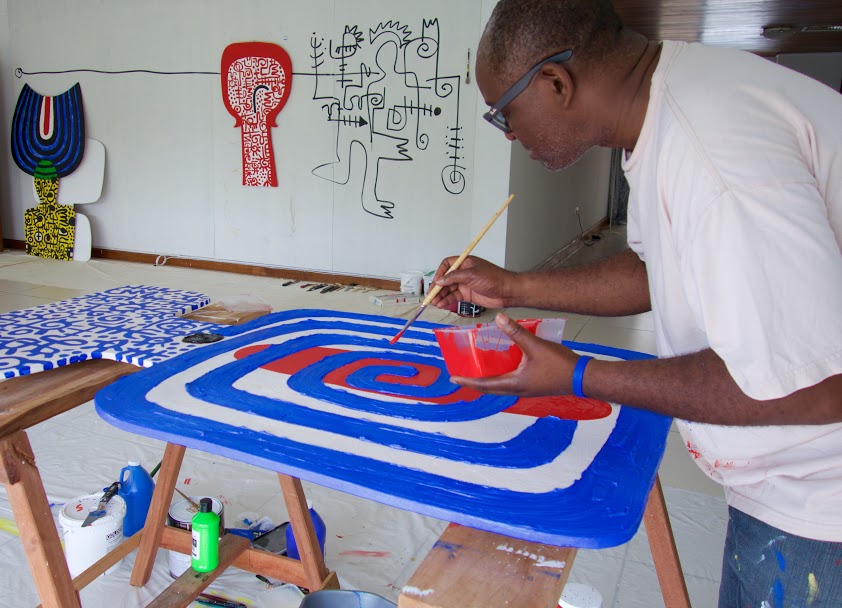 But what stories does the artist aim to tell through his work? Victor Ekpuk’s creations touch upon identities, particularly of black individuals in the African Diaspora. In the vein of story-telling, the artist often looks back to historical matter to trace how the Diaspora exists as it does today. In one powerful work, for example—and one of the artist’s most famous—Union of Saint and Venus, the symbolism of the piece refers to Renaissance figure Giulio de’Medici (who was later known as Pope Clement III, hence the papal dress) impregnating the enslaved Simonetta da Collevecchia (referred to in the form of the renowned sculpture The Hottentot Venus). Through this historical act of violence, the artist responds to the documentation of the Catholic Church propagating white racial hegemony. The painting now exists in the National Museum of African American History and Culture’s permanent collection. Not all the artist’s paintings refer so obviously to a distinct narrative or historical moment, however. In many of the artist’s work, the pieces are almost totally abstract, and refer only to the language and history of Nigeria, and humankind’s connection to the sacred. 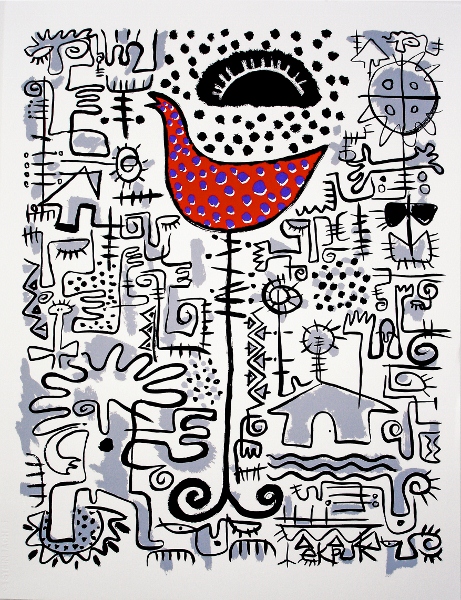 Cockcrow at Dawn by Victor Ekpuk, 2006

In addition to being in the collection of the National Museum of African American History and Culture, Ekpuk’s works are also collected in private and public collections, such as the Smithsonian Institution National Museum of African Art, the Newark Museum, the World Bank, and others. The artist has also exhibited at Somerset House in London, the Institut du Monde Arabe in Paris, the Smithsonian Institution National Museum of African Art, the New Museum of Contemporary Art in New York, the Krannert Art Museum, the Johannesburg Biennial in South Africa and Dak’Art Art Fair. With such a star-studded resumé, it’s no wonder that Victor Ekpuk is one of the most fascinating Nigerian artists living in the United States today. Pavillon54 has the pleasure of partnering with one of the artist’s galleries, Morton Fine Art, in exhibiting and selling his pieces right here on our very own website. Want to learn more about the artist and his creative output? Click here to view the artist’s available works, and don’t hesitate to contact us if you need any more information!