7 Modern Congolese artists you should know

After Nigeria and South Africa, let’s keep on with the Democratic Republic of Congo. In this article, we are looking at modern Congolese artists who have been mainly influential during the second half of last century. The following artists have been nationally acclaimed for their work and contribution to the arts. Often praised for their vividness and social reflection, Congolese art creations translate the conditions of their time and making. Artists long practiced under colonial supervision and influence. The advent of modernism and independence brought new streams of creation and innovation in the visual arts. Modern Congolese artists found inspiration in modern patterns and global artistic influence while remaining faithful to traditional art forms and practices. In this survey, we purposefully highlight artists who haven’t necessarily enjoyed major international recognition – such as Chéri Samba or Bodys Isek Kingelez – , but who have had a prolific career in the country.

Locating modern art in the history of the Congo that has seen several art ideologies and movements coexist and collide with each other is not an easy task. It would be hard not to mention the Hangar workshop founded under the impulsion of Pierre Romain-Desfossés in 1946 until his death in 1954. Naval officer and painter, he settled in Lubumbashi in 1944 where he set to let local art creation blossom untainted by western art canons or influence. Artists such as Pilipili Mulongoy, Mwenze Kibwanga or Sara Bela were encouraged to find inspiration in nature, their direct environment and surroundings. Scenes of fauna, flora and rural life are predominant in their work, and the application of paint displays much freedom and ingenuity. The results of an auction of works by artists of the Hangar held earlier this year speak for their international appeal. At its demise, the Hangar integrated the Académie des Beaux-Arts of Élisabethville (former Lubumbashi), where some of those artists passed on their skills and vision of art creation. 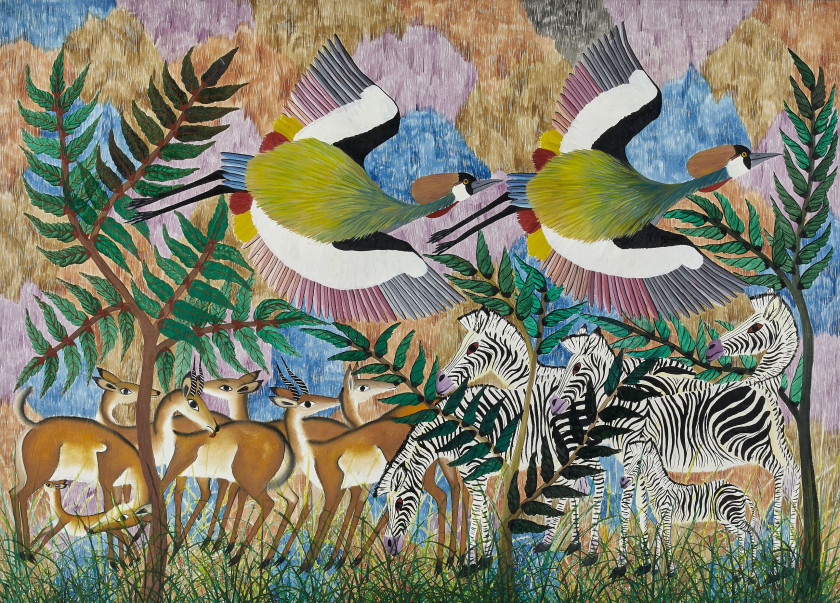 The seven artists you should know in this review have all been recognised by their peers and have had a considerable national and pan-African influence, through their academic involvement, their progressive approach or the Zaïre regime of the time. Whether in Kinshasa or Lubumbashi, the two main creative hubs in the country, the breaks in Congo’s history have had considerable effect on the production and reception of modern art.

Student of the artist Pilipili Mulongoy, but not less influential, we start this review with an artist that hasn’t been directly supervised by the Hangar workshop but who developed a consistent and modern body of work. Mode Muntu’s spirited, colourful and silhouette-based painting displays the elementary aspect of modern painting at its best while staying rooted in a traditional imagination or narrative iconography. Many have compared his work with the like of Keith Haring or A.R. Penck. Born in 1940 he was soon influenced by his elders, former artists of the Hangar workshop, who were a real source of inspiration as far as the colour palette and the technique ingenuity were concerned. He soon developed his own style, using gouache and cardboard as support. His realisations have a universal graphic appeal tainted of deep reflections of his time. 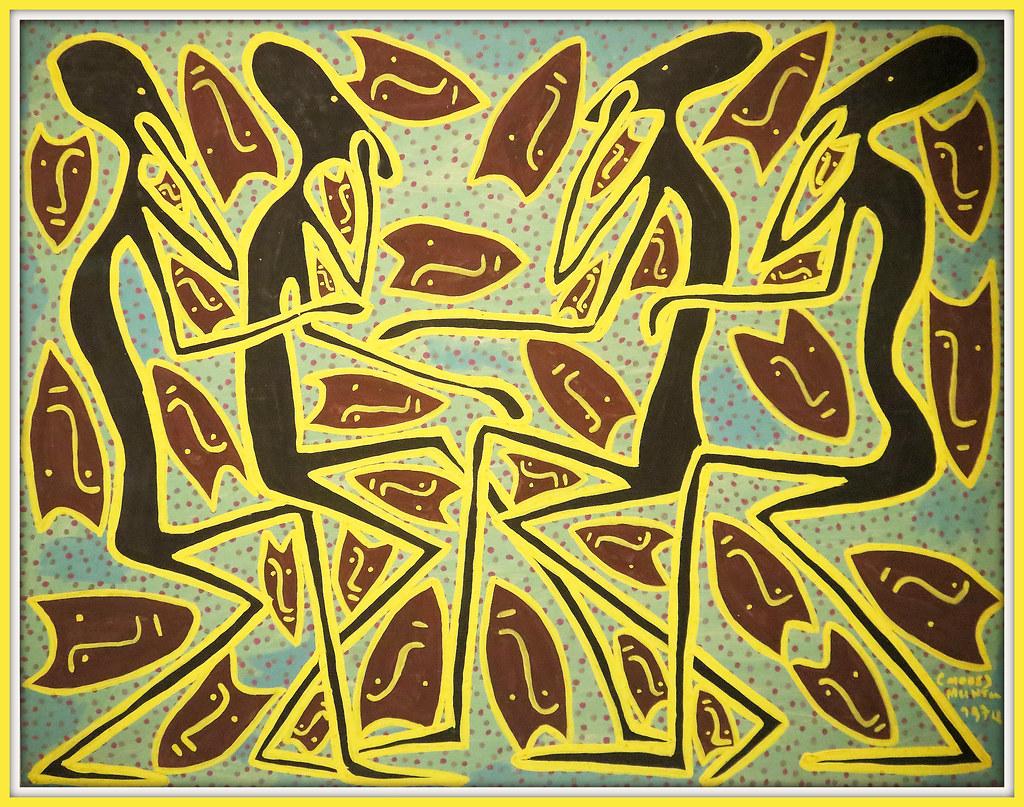 Coming from a family of artists, he showed his talent as a designer from an early age. He first studied at the Academy of Fine Arts in Kinshasa before becoming himself a teacher in the Academy. N’damvu participated in the first World Festival of Black Arts in Dakar in 1966 and in the Universal Exhibition in Montreal in 1967. He then exhibited in Liège (1973), in Lausanne (1974), in Paris (1975), in Los Angeles (1977), and in Brussels and Paris (1978). He reserved a prominent place for women in his plastic expression. A pioneer from the outset, N’damvuwas a militant in the Grand Atelier where, with Liyolo, Mavinga, Lema, Mokengo and Tamba, he defended the message of “Zairian authenticity” during the Mobutu regime (Bio retrieved from Stanley’s Auction Modern & Contemporary Congo Art catalogue – February 2021). If one sculptor has to come out of this survey, here he is. Alfred Liyolo was born in 1943 in the former Bandundu province. He passed away a bit more than two years ago, leaving behind him a founding artistic legacy. Shaping bronze, Liyolo’s quest has been one of beauty, transmission, and audacity. One of his most visible achievement is the large-scale statue of the Congolese rumba musician Franco Luambo Makiadi in Matonge, Kinshasa. Liyolo sculpted bronze with gracious lines and a universal language in various scales. A passionate artist, his work has been generally well-received. Liyolo can be seen as a monument of African modern sculpture. 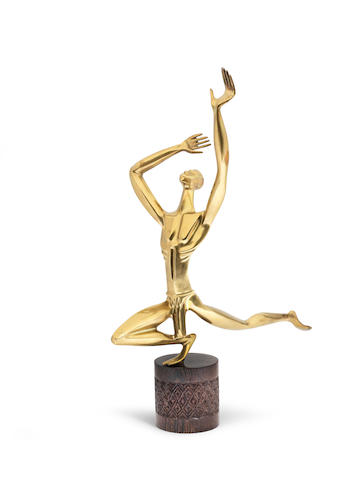 Lema Kusa can be seen as one of the most classical modern painter of the Congo’s modern era. In 1958, he entered the Academy of Fine Arts in Kinshasa where he studied advertising painting and illustrations. Lema continued his training and professional experience at Higher Institutes and advertising agencies in Belgium. The popularity of modern art and painting in the country, and particularly in Kinshasa, is often tight to the depictions of daily (urban) life and moral concerns, and to the advertising purpose or dimension of the practice. Lema’s work displays an expressionist palette and a figurative nature. “His paintings are often symbolic and sometimes abstract. He participated in the National Symposium on Authenticity in September 1981 at N’Sele held by the Writers’ Union of Zaire” (Art and About Africa) Kamba Luesa has been prolific from an early age on, showing great talent and originality. Visibly inspired by rock art, the lines movement in his compositions is more complex and resolutely modern. Luesa’s work with colours is innovative in many ways. He is best known for a technique of colour scraping which enhances the rock and scenery effects of his paintings, giving them a subtle colour gradient and warmth. This technique has inspired many of his peers. Kamba Luesa is an early symbol of the will to break with a certain form of academic classicism (as conveyed through the creation of the Grand Atelier) and to propose new forms of art expression. Well-known artist in Kinshasa, Roger Botembe has significantly contributed to the advancement of contemporary painting practices in the capital city of the DRC. In 1992, he founded Les Ateliers Botembe, a space dedicated to the promotion of a renewing vision and energy in the practice of art.  Botembe’s late body of work translates the concept of the ‘trans-symbolism of the African mask’ that was dear to him. He found inspiration in traditional masks, artefacts, and symbols that he actualised in his own abstract style in a spirit of transmission, progress, and elevation of African culture. Botembe held the position of associated professor and head of works at the Academy of Fine Arts in Kinshasa. 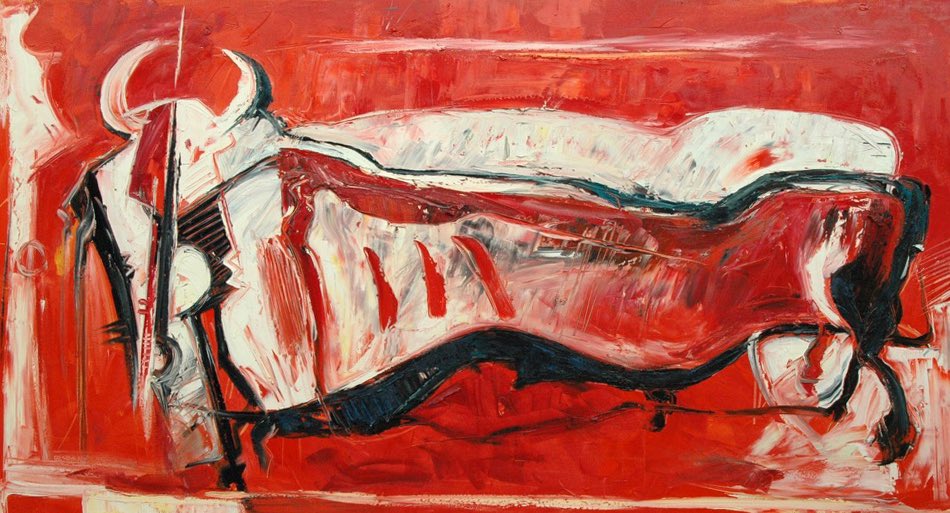 We end this review with a self-taught artist whose difficult beginnings eventually found recognition in the eyes of Mobutu and of the global art world to this day. Moké’s work, along the ones of the Zaire School of Popular Painting, finds its roots in the urban popular culture of the 60s, 70s and 80s. In his relentless painting, one can almost sense, hear and feel the lively atmosphere of his depictions. Moke, almost like a photographer, makes a great chronicler of his time. Women, and in particular the figure of the water spirit Mami Wata, were one of his favourite subjects. Moké’s buoyant and realist paintings are appealing to anyone who has experienced or relates to that modern era of the country. Read more here. 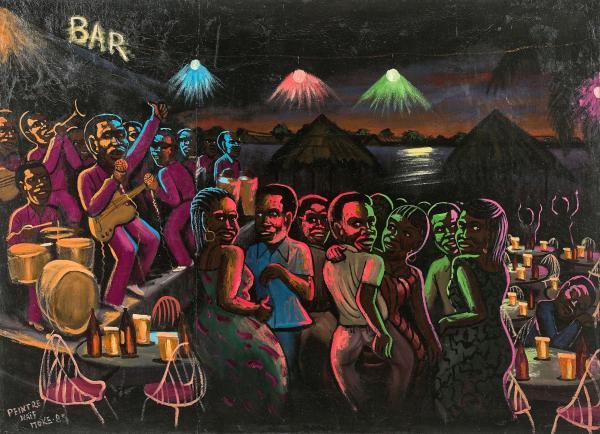